Here’s a little story about a poor woman in 1810 Newburyport, Massachusetts, and the one piece of embroidery she left behind. 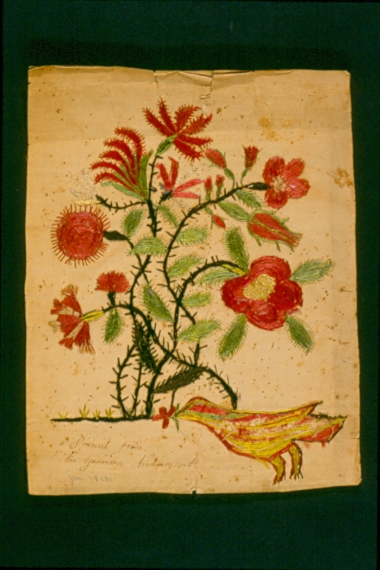 Frances Lloyd Garrison (Fanny) is best known as the mother of the boy who became one of the U.S.’s most important antislavery leaders. William Lloyd Garrison (Lloyd to his family and friends) published his weekly newspaper, The Liberator, from 1831 to 1865. He was also a well-known speaker, organizer, and proponent of major progressive causes including racial and gender equality, dress and food reform, improvement in healthcare and a zillion other issues. Fanny died long before her son became an abolitionist star but in time to see two daughters die, a son become an alcoholic seaman like his father, and to suffer all the hardships that single mothers experienced in the early nineteenth century.

In a nutshell, here is Fanny’s story. Born in 1776 in New Brunswick, Canada, early on in life Fanny Lloyd broke with her family by rejecting their strict Episcopalian beliefs in order to follow the new wave of Baptism. Thrown out of her childhood home, she came under the protection of an uncle in Eastport and there became one of the few literate women to conduct religious meetings when the Baptist minister was officiating in another town. She soon met Abijah Garrison whom she married in 1798. He was a well-meaning seaman who hit upon hard economic times. In an effort to improve their lot, the pair moved their small family to prosperous Newburyport, Massachusetts, where they lived in harmony until war and U.S. embargos on trade that began in 1807 forced ports like Newburyport into economic depression. Abijah turned to drink. Fights ensued, and Fanny kicked him out of their home. She never saw him again.

Fanny’s life as a single mother drove her into desperate poverty. She had three children to support and no real job opportunities. She drummed up some work doing what we would today term “homecare,” but basically, she lived off the generosity of her landlady who watched her children and didn’t demand the rent be paid on time. When Fanny was without income, she made molasses candy which she gave to sons James and Lloyd to sell on the streets. In more desperate moments, Lloyd was sent to a mansion of a wealthy family on State Street to pick up meal leftovers saved specifically for Fanny.

Eventually, Fanny left her children in the care of others in order to move to Lynn, Massachusetts, and then Baltimore, Maryland, to eke out a living. The separation tortured her, but she saw no other way to survive. She kept in touch with Lloyd and her daughter Elizabeth but often lost touch with James who had run off to sea. Within a few years, she grew ill, probably with lung cancer, and died in 1823 at the relatively young age of 45. You can read all of Fanny’s story on my website at http://harrietalonso.com. Just go to the top of the main page and click on “William Lloyd Garrison’s Mother.”

Now, what does this all have to do with us embroiderers? When I was researching and writing my book, Growing Up Abolitionist: The Story of the Garrison Children, (2002) I became enthralled by Fanny’s story. It was one of the few stories I had seen at that time that told of the struggles of a single, abandoned mother. And it was my good fortune to be working on the Garrison family’s story for they preserved their family’s papers well. In terms of Fanny, there were a number of letters written by both her and Abijah and some recorded memories from Lloyd and James. But outside of these, there was little other tangible evidence that she even existed—no photos or daguerreotypes, no paintings or sketches, no clothing, jewelry—nothing but a small piece of embroidery I came across in a file marked “Ephemeral” in the Garrison Family papers at Harvard University. This one item told me much about Fanny’s life that it might not have told other historians. It was my unique combination of being a historian and an embroiderer that allowed me to enter the world of that piece.

We all know about the beautiful samplers moneyed girls worked on as part of their education. We can look at beautiful bargello pillows and embroidered chairs, crewel embroidery, goldwork, lace, etc., etc. But when it comes to embroidery done by less fortunate women of the late eighteenth and early nineteenth centuries, we have little. We know that they learned how to darn and monogram and sew, but there is little proof of whether they liked to embroider for pleasure or for art. That is why Fanny’s piece is so moving to me.

The item you see pictured above is a piece of crewel embroidery, inscribed in pen on the bottom, “a Present from Mrs. Garrison, Newburyport” and then in pencil, perhaps added as an afterthought, “jan. 1810.” Just the fact that this part of the work was handwritten and not stitched told me worlds about Fanny. Let me continue the description, however. The piece itself consisted of two sheets of paper held together by large and crude long and short, stem, and back stitches in the shape of a vine with leaves, big flowers, and a bird on the ground. The yarn was fairly coarse and came in three shades of green, a small amount of yellow-green, and two shades of rose.

When I took the piece out of the “Ephemeral” box and held it in my hand, I could see a haphazard pattern of knots and crossed threads on the back, a sure sign of an unskilled or unsophisticated stitcher. I touched the coarse fiber and ran my fingers across the paper, and as a sister embroiderer, I felt the care and attention that went into the work. This piece of embroidery gave me a real sense of Fanny’s poverty. Who but the very poor at that time would embroider a gift on a plain sheet of paper? Who would not even have a scrap of fabric to use? But it also told me of Fanny’s dignity. Perhaps to show gratitude to the family on State Street who gave her food, to a church member who helped her out, or to an acquaintance who showed compassion, Fanny wanted to give something back—and that something was a piece of herself. We all know that any piece of embroidery takes time and care, and while being created, we often think about its purpose and its recipient. Embroidery is our personal statement. We hope that the person who receives it will take note of the time and skill it took, and I seriously doubt that any embroiderer would give a piece of her work to another person if she did not feel at least some pride in it herself. Fanny, of course, probably thought about that, for the piece was most likely never given to its intended recipient. How else could it have been in the Garrison archives? But, I wonder, did Fanny make other mementos for people she appreciated? Sadly, I doubt we’ll ever know.

One thought on “Fanny Garrison’s Embroidery from 1810 Newburyport, Mass”