Let’s start with the next installment of Chapter 1. For those of you new to the blog, the first installment appears in the July blog post. We left off where an injured and confused Martha cannot remember exactly who she is, where she is, or anything much about her past. She does remember her name and when she sees an envelope with it on the small table next to her, she picks it up and begins reading. In the August blog post, the letter results in questions crowding Martha’s brain. We continue . . .

Martha’s eyes welled up with tears. She had never been away from her parents before she left home just a few weeks ago. Why had she gone? She thought hard, but it was all a blank.

Your mama is not doing well.

Mama. Martha longed for her lovely mama who had been ailing for several years.
But of what?

Fear, worry, secrets and lies have all lodged themselves in her mind. Nowadays she does not move from her favorite rocking chair in the parlor. She only stares out into a world I am not a part of, mumbling in her Quaker plain speech about her childhood and the glories of her youth when nonviolence and goodwill encased all that she did. The morning you left, she went to your room and took your ragdoll and now talks to it as if you were here. “Thee is a good girl.” “Keep thy brother safe.” “I love thee both.”

Martha pounded on her head, then winced. What were these secrets and lies that had so hurt her mama that she had withdrawn from the world? Why couldn’t she remember? Somewhere deep inside she knew her mama needed her and that she had to get home. Who would take care of her if she wasn’t there?

B____ comes over once a day to help tend to her. She takes our laundry and cleans the house as well. She has been a godsend considering all the responsibilities she has at home helping her own mama with the house and the many children. She sends her love and wishes you safekeeping until she can see you again.

Yes, of course. Becky, her best friend. She knew in her heart that she could rely upon her. Remembering Becky also brought back Caleb. (To be continued . . . )

Last month, I began talking about the “team” that has joined together to produce this book. I just want to say that I have not included all the folks who supported me during the writing of it. I’ve thanked them in the “Acknowledgements” in the book and hope you will take a moment to read that section and see just how many people put their minds to work for me. This month, I’d like to continue describing three other participants in the actual producing of the final product.

One of the first people I mentioned earlier was my agent, Marie Brown, of Marie Brown Associates. There is so much to say about Marie that I find it difficult to even begin. When I began writing the story of Martha and Jake, I participated in classes and workshops about writing for children. I also read every book and article I could find about the topic. In almost every place I received this advice: “If you want to be published, get an agent.” This was often countered with, “Of course, this will take a while, and many writers never find one.” Now, I have five non-fiction adult books out in the world and had never worked with an agent. The thought of finding one scared the bejeezus out of me. And what did an agent do anyway?

I began searching by looking through all the websites recommended and by using the resources on the website of the Society of Children’s Book Writers and Illustrators (SCBWI), an organization that is a godsend to everyone in the field. I marked several agents (and editors/publishers) as possibilities, but I kept returning to one: Marie Brown. She just seemed like a good choice for me. Marie was the first African-American woman agent in New York City and her goal in her long career in all areas of publishing has been to foster books about and/or by writers of color. She accepts queries and proposals by snail mail, only switching to more modern technology once she has decided to represent you.

To be honest, I was reluctant to reach out to her. Her reputation and experience somehow intimidated me. But a friend of mine at City College had an acquaintanceship with her and told me to go ahead and to include his name in the letter. (Two other of my colleagues had also recommended me to agents, but nothing much happened in those cases.) So, I sent a letter out to Marie, and a while later received a real (as opposed to an email) letter back expressing interest in seeing the entire manuscript. I was lucky, not only because Marie loved the story and felt that it should be published but also because I had only sent out less than a dozen queries before this.

Over the two years it took for Marie to “sell” the book, I had plenty of time to learn what a good agent does. She suggests ways to tweak the book. She talks about the characters and plot with a knowledge and sensitivity that helps in the editing process. She seeks out publishers and editors, and when there seems to be little interest from them, she keeps the author’s spirits up. Marie is so knowledgeable and connected to the publishing world that she also stays with her authors to guide them through publicity and marketing. I’ve had wonderful conversations with Marie ranging from punctuation to race relations in the U.S. today. I can’t say enough good things about her. . . and I haven’t.

To bring this blog post to its end, I’d like to introduce you to the last two members of the “team” who I refer to as my “education specialists.” These include geographer Patricia Caro who created the two maps which illustrate Martha’s journey.

Pat is a Professor of Geography at Nassau Community College on Long Island, New York. She created a map for my son, Miguel C. Alonso’s book, The Development of Yoruba Candomble Communities in Salvador, Bahia, 1835-1986, and I was so impressed that I asked him if he would put me in touch with her. Pat was more than willing to create maps for my own book, and to accommodate the audience, she designed them to resemble 19th century creations that would be appealing to younger readers. I’ve included one here so you can see and appreciate her style for yourself. 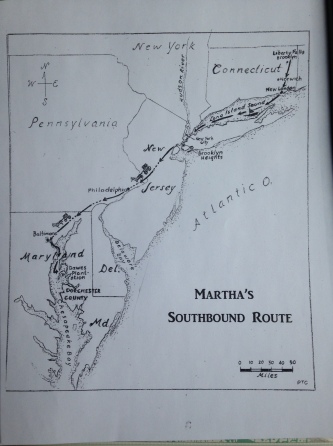 The final member of my team is Catherine Franklin, a professor of Childhood Education at the City College of New York, CUNY. Catherine and I met about fifteen years ago when we team-taught a class for graduate students seeking Social Studies certification in childhood education. It was a most interesting project. We designed a course where I was to cover the history of abolitionism and also the early woman’s rights campaign in the U.S. and Catherine would introduce concepts for designing curriculum. It took no time at all for us to muddy the waters. Soon I was looking into teaching methodology and she was studying history. We have continued our working relationship and wonderful friendship over the years, and when Seven Stories gave me the green light for a curriculum guide for the book, I asked Catherine if she would like to create it. Her infectious enthusiasm has resulted in a terrific tool that you will soon be able to find on the Seven Stories website. Besides looking at the text closely, the guide offers up suggestions on how to bring the history and the meaning of the deeper issues in the book to children.

Until next month, when we’ll continue with chapter one and talk about how an author lets go of her work.

One thought on “Two Months Until “Martha” Arrives”